Tres Leches Cake Has Its Origins in Condensed Milk 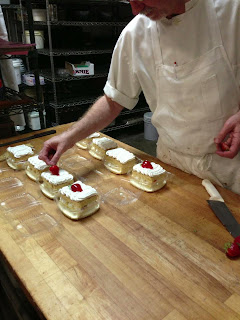 Tres leches cakes are a wonderfully decadent dessert that we are now offering at Ontario Bakery.

You’re in for a treat if you’re not familiar with the tres leches cake. Tres leches is a sponge cake drenched in evaporated milk, sweetened condensed milk and whole milk.

For years, this kind of cake has been a staple of many celebrations throughout Latin America and, more recently, the United States. The cake is similar to others in Europe, such as the tiramisu

However, no one can agree where exactly the cake originated, with several countries and even one maker of condensed milk claiming to have created this delicious cake. So many have tried to take the credit that San Francisco Chronicle writer Jacqueline Higuera McMahon once quipped, "It seems to be like a child with too many fathers.”

Most often, historians have credited Nicaragua and Mexico for coming up with the recipe. What is known is that canned condensed milk and evaporated milk was first sold in the mid to late 1800s.

Regional and other variations

To be sure, there are regional and other variations of the tres leches cake. Sometimes, Mexicans add a fourth kind of milk called “cajeta,” which is super sweet syrup made from sweetened caramelized milk. The cake then becomes the cuatro leches, or four milks, cake.

Other variations include adding ingredients such as chocolate, fruit or nuts.

The cake seems to be most popular in Nicaragua, Mexico, Cuba, Puerto Rico and Guatemala. Come try a slice of our tres leches cake next time you visit us.